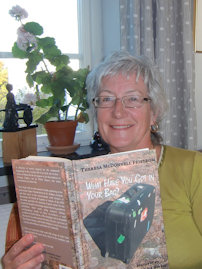 She is a Member of Concern, and a Member of the CLTS Foundation, and an Associate Medical Missionary of Mary (MMM). She currently teaches English in Simrishamns Komun, Sweden. She was born and grew up in Rathcoole , Co. Dublin, Ireland and is married to Gunnar Friström . She now divides her time between Ireland and Sweden.

They begin with an early-summer family gathering in the picturesque Upper Punchestown in Co. Kildare, Ireland, and then move to the semi-nomadic cattle herders of Karamoja ; the burial in Uganda of victims of the 1994 Rwandan genocide; the choosing of paint colour for the hospital in Kagadi ; convincing sceptics that it is possible to rehabilitate rural roads using women’s labour ; car-hijackings; deaths of three co-workers; a road accident in South Africa; a life-changing visit to beautiful Brantevik in south-eastern Sweden; dreams; survivors of the Khmer Rouge; and finally helping to create an award winning microfinance institution in Cambodia. These are memories that come like drops of water that separate for the great mass, dance in the sunshine, and create rainbows. These are stories that want to be told.

“These are wonderful stories, beautifully written. I really enjoyed your writing style, and you have much to share about the life you have lived and the experiences you’ve been through.” – Laura Monroe