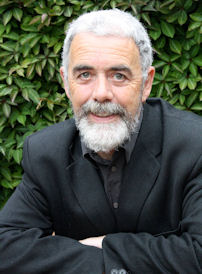 Theo Dorgan was born in Cork in 1953, and now makes his home in Dublin. He is a poet, prose writer, translator, editor and broadcaster. His most recent collection of poems, GREEK, was published in 2010 by Dedalus Press.

He has written two books about his ocean voyages: SAILING FOR HIME, an account of his journey from Antigua to Kinsale, recounts the voyage of the Schooner Spirit of Oysterhaven back to her home waters from the Caribbean. Originally published by Penguin, the book has now been re-issued by Dedalus Press. Nobel laureate Doris Lessing praised SAILING FOR HOME as “a book for everyone”. Late last year, Dorgan published TIME ON THE OCEAN, A Voyage from Cape Horn to Cape Town (New Island, 2010). Described by Gay Byrne as “an inspirational story, beautifully told”, the book tracks Dorgan and his fellow crew on a wild ride through the Southern Ocean; 12 metre waves and 80 knot winds provide the thrills, but the book is also a long, thoughtful meditation on life, the ocean and the transience of things. Dorgan’s Great Grandmother died in Childbirth off Cape Horn, which prompts a poignant tribute from the author as, in his own words, he sails over her bones.