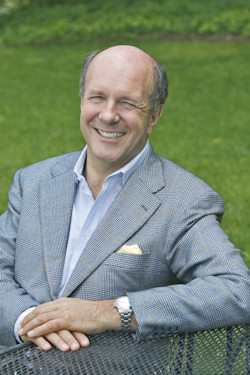 Simon Winchester, best-selling author, journalist, and broadcaster, has worked as a foreign correspondent for most of his career and lectures widely at universities, geological and historical societies, and libraries. His current book is the New York Times best-seller The Man Who Loved China: The Fantastic Story of the Eccentric Scientist Who Unlocked the Mysteries of the Middle Kingdom, the remarkable story of Joseph Needham, the eccentric and adventurous scientist who fell in love with China and whose own work there unveils the epic story of that magisterial country.

The author of 21 books, including the best-sellers The Professor and the Madman, an account of the men behind the Oxford English Dictionary, A Crack in the Edge of the World: America and the Great California Earthquake of 1906, and The Map that Changed the World, about the nineteenth century geologist William Smith, Winchester specializes in eccentric, obsessive geniuses. He is praised for his skills as a masterful and riveting storyteller both on the page and in lectures.

Winchester’s journalistic work, mainly for The Guardian and the Sunday Times, has landed him in Belfast, Washington, DC, New Delhi, New York, London, and Hong Kong, where he covered such stories as the Ulster crisis, the creation of Bangladesh, the fall of President Marcos, the Watergate affair, the Jonestown Massacre, the assassination of Egypt’s President Sadat, the recent death and cremation of Pol Pot, and, in 1982, the Falklands War. During this conflict he was arrested and spent three months in prison in Ushuaia, Tierra del Fuego on spying charges.

Winchester writes and presents television films on a variety of historical topics and is a frequent contributor to BBC radio. Yet, the self-described “traditionalist who loves fine paper and ink” has written his first book entirely for a digital medium, an interactive app for the iPad called Skulls, published by Touch Press and and available on the App Store. “The app is a wonderful way of exploring the skull in human culture and as a symbol,” Winchester says.

Although he graduated from Oxford in 1966 with a degree in geology, Winchester only spent a year working as a geologist in the Ruwenzori Mountains in western Uganda and on oil rigs in the North Sea, before joining his first newspaper in 1967. He now works principally as an author, although he contributes to a number of American and British magazines and journals, including Harper’s, The Smithsonian, National Geographic Magazine, The Spectator, Granta, the New York Times, and The Atlantic Monthly. He was appointed Asia-Pacific Editor of Conde Nast Traveler at its inception in 1987, later becoming Editor-at-Large. His writings have won him several awards including Britain’s Journalist of the Year. He writes and presents television films, including a series on the final colonial years of Hong Kong and on a variety of other historical topics, and is a frequent contributor to the BBC radio program, From Our Own Correspondent. Winchester is a fellow at London’s Royal Geological Society.

He was made an Officer of the Order of the British Empire (OBE) ‘for services to journalism and literature’ in the New Year Honours list for 2006. He was elected an Honorary Fellow of St. Catherine’s College, Oxford, in October 2009.