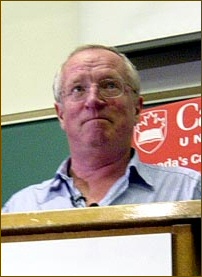 Described by the New York Times as “probably the most famous foreign correspondent in Britain”, he has over thirty years of experience in international reporting, dating from 1970s Belfast and Portugal’s 1974 Carnation Revolution, the 1975-1990 Lebanese Civil War, and encompassing the 1979 Iranian revolution, the 1980-1988 Iran-Iraq war, 1991 Persian Gulf War, and 2003 Invasion of Iraq. He is the world’s most-decorated foreign correspondent, having received numerous awards including the British Press Awards’ International Journalist of the Year award seven times. Fisk speaks good vernacular Arabic, and is one of the few Western journalists to have interviewed Osama bin Laden (three times between 1994 and 1997).

Fisk’s reporting – and his bestselling books, based on his field notes and recordings – combine straight factual reporting with analysis and often strong criticism of Middle Eastern governments as well as what he perceives as hypocrisy in British and United States government foreign policy. His view of journalism is that it must “challenge authority – all authority – especially so when governments and politicians take us to war”, and he quotes with approval the Israeli journalist Amira Hass: “There is a misconception that journalists can be objective … What journalism is really about is to monitor power and the centres of power.” Fisk has received widespread praise on the political left and criticism from the right, the latter in particular for an alleged anti-American and anti-Israeli bias in his emphasis on reporting the alleged ills done to the Middle East by the West from the Great War onwards.