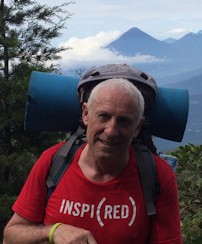 Peter Murtagh is a reporter with The Irish Times. He has held a number of senior positions in the paper over many years, as well as in The Guardian newspaper in London. He is well travelled and has written from many places in Europe as well as Asia, South and Central America and South Africa, occasionally observing places from the vantage point of his motorbike. In 2011 he wrote, with his daughter Natasha, a book about their journey together on Camino de Santiago. He has since walked the Portuguese Camino and the Camino Primitivo.