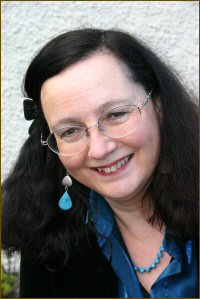 Órfhlaith Ní Chonaill was born in Tralee, Co. Kerry, in 1955. At the age of five, she became a poet. She attended the local primary and secondary school in Balloonagh, Tralee. Her first travels took her to Dublin where she studied Religious Education in the Mater Dei Institute. And, oh yes, there was a magical trip to Lismore! It was May and there were bluebells and wild garlic in the woods. During those years she was still writing poetry and songs. She taught for a year in Cork and a year in Dublin, but a questioning of religion had begun and her career in religious education ended.

In 1977, she returned to Dublin to marry Robin, the love of her life. They moved to Sligo in 1980 and the boys, Kevin and Rowan, were born. By then the need to write had become urgent, so Órfhlaith joined the Markievicz Writers’ Group with Dermot Healy in Sligo. Rowan, the baby at the time, was wired up to headphones and a stereo player for an hour each day while his mother pounded away on an old typewriter, reinventing herself as the writer she had always wanted to be. Her poems, short stories and interviews were published in Force 10 and other magazines. She attended night classes in St Angela’s College and earned a Certificate in Irish Literature in English from UCG.

The next part of the journey was the most exotic and life-changing. Órfhlaith and her family lived in Nairobi from March 1993 until November 1996. She was bowled over by the culture and by the local people with their openness, their (very Irish) sense of humour, their cheerfulness and their resilience, often in the face of great adversity. For the first time in her life, she had to redefine herself as a white woman. She found herself belonging, somehow, to the wrong tribe. The ghosts of coloniser and colonised were still thick in the air. The Kenyan experience found its first timid expression in a short story called The Laughing God.

Back in Ireland, she obtained an M. Phil (Creative Writing) from Trinity College Dublin (1998). During that year, a second African story, Kikuyu Grass, was published in the Sunday Tribune and short-listed for a Hennessy Award. These two stories later grew into the African novel, The Man With No Skin.

Órfhlaith went to Boston in 2001, to study with Pat Schneider, the creative writing guru, who developed the Amherst Writers & Artists’ creative writing workshop. The belief behind the method is that genius is hidden everywhere; it is in every person waiting to be evoked, enabled, supported and celebrated. She has been facilitating writing workshops in Sligo and around the country for seven years.

The Man With No Skin was published in Colorado in 2005. It was the recipient of IPPY (Independent Book Publishers’) and CIPA (Colorado Book Publishers’) Awards in the US in 2006. It was very well reviewed. Eoghan Harris, in his column in the Sunday Independent said that it ‘carries big ideas with the deceptive ease of JM Coetzee’s Disgrace, but has the same eye for local African colour as Alexander McCall smith in his comic classic, The No 1 Ladies Detective Agency’ Mark my words, this novel is going to go to Oprah and beyond.’

The Man With No Skin is available from Amazon.com and in bookshops in The USA. A distribution deal for Ireland is yet to be agreed.