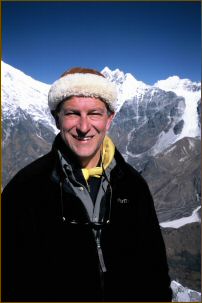 Nick Middleton is a geographer, writer and presenter of television documentaries. He teaches at Oxford University where he is a Fellow of St Anne’s College.

He is the author of seven travel books, including the 2001 bestseller, Going to Extremes (Pan) and its follow-ups Surviving Extremes (Pan, 2004) and Extremes along the Silk Road (J Murray, 2006). Each of these sets of adventures, which looked at some of the world’s least hospitable environments and those who live there, was filmed as a major television series, which he wrote and presented for Channel 4 in the UK and National Geographic Channel in most other parts of the world. His most recent series, Britain’s Worst Weather (tx February 2007), is also for Channel 4.

A Royal Geographical Society award-winning writer, Nick’s interests span the entire subject of geography. He also works, teaches and communicates on a wide variety of environmental issues for a broad range of audiences, from policy-makers to five year-old children. His books in these areas include The Global Casino: An Introduction to Environmental Issues, and the UN Environment Programme’s World Atlas of Desertification.