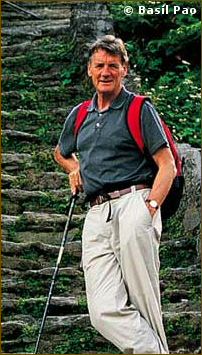 Michael Edward Palin (born May 5, 1943,in Sheffield, Yorkshire) is a British comedian and television presenter. He is famous for being a member of Monty Python and writing and starring in their Flying Circus series in which he generally played roles that called for manic enthusiasm (such as the lumberjack of the Lumberjack Song), or unflappable calmness (such as the Dead Parrot vendor or Cheese Shop proprietor). As the latter, he was often the perfect foil to the rising ire of characters portrayed by John Cleese. Michael Palin was educated at Birkdale preparatory school and Shrewsbury public school. He went on to read History at Brasenose College, Oxford.

After Monty Python, Palin subsequently collaborated with Python writing partner Terry Jones on the television comedy series Ripping Yarns. He also appeared in All You Need Is Cash as the lawyer and press agent for The Rutles.

In later years, Palin rejoined Cleese for the movies A Fish Called Wanda and Fierce Creatures and played an information retrieval specialist in fellow Python Terry Gilliam’s Brazil. He has assisted Transport 2000 and others with campaigns on transport policy issues, particularly those relating to urban areas.

More recently, he has presented several series of travel programmes on television;

Michael Palin: Around the World in 80 Days (1989), travelling as closely as possible the path described in the famous Jules Verne story of the same name without using aircraft.
Pole to Pole (1992), travelling from the North Pole to the South Pole, following as closely as possible the 30 degree line of longitude, over as much land as possible – i.e., through Europe and Africa
Full Circle with Michael Palin (1997), in which he circumnavigated the lands around the Pacific Ocean counter-clockwise, starting on Little Diomede Island in the Bering Strait
Michael Palin’s Hemingway Adventure (1999), retracing the footsteps of Ernest Hemingway through the United States, Europe, Africa and the Caribbean
Sahara (2002), in which he trekked through the world’s largest desert.
Himalaya (2004), in which he travels through the Himalaya region
Palin’s travel programmes are responsible for a phenomenon termed the “Palin effect”, in which areas of the world visited by Michael Palin suddenly become popular tourist attractions – for example, the significant increase in the number of British tourists interested in holidaying in the Sahara region in 2003.
Palin has also appeared as a ‘straight’ actor in serious drama, most notably in the 1991 serial G.B.H., broadcast on the Channel 4 network in the UK.

In a 2005 poll to find The Comedian’s Comedian, he was voted amongst the top 50 comedy acts ever by fellow comedians and comedy insiders.

Books By Michael Palin Include: