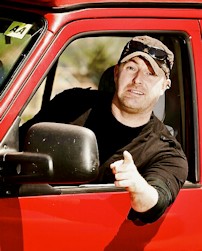 Mark Graham discovered his love for festivals while hanging around with various ne’er-do-wells playing music at many of them, a habit he hasn’t managed to kick just yet. As well as publishing the tale of his quest to attend three festivals in Ireland every week for a year, he writes a weekly festival column in The Ticket with the Irish Times every Friday and has been a regular contributor to the John Murray Show on RTE Radio 1. His Year of Festivals Blog has won a couple of awards, but more importantly, during his Year of Festivals he won both the All Ireland Bucket Singing Championship and The All Ireland Conker Championship. It’s quite likely that he’s addicted to festivals, Buckfast and crisps.

A Year Of Festivals In Ireland
Meet Mark Graham, Conker Champion of Ireland, All-Ireland Bucket-Singing Champion and the sixth-best bog snorkeler in Ireland. Rejected by the banks as he looked to start on the journey to home ownership, Mark started in an altogether more interesting and exciting journey to attend three festivals a week for a year.

In this entertaining roller-coaster tour of Ireland, Mark paints a picture not of a broken and maudlin country that lost the run of itself, but of a people with a wealth of character, imagination, generosity, wildness, curiosity, creativity and an insatiable hunger for fun and divilment. The surprising array of weird and wonderful festivals around Ireland are matched and surpassed by the cohort of characters and clients who attend them. Throwing himself into the thick of these gatherings may have nearly killed him, but he survived his year of festivals, enjoyed almost every minute and was left with a tale or two to tell.