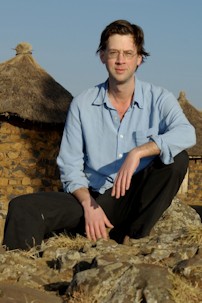 Manchán Magan is a writer and documentary-maker. He wrote the Magan’s World travel column for Saturday’s Irish Times Magazine for 6 years and currently hosts the Right Hook travel slot. His travel documentaries focusing on issues of world culture for TG4, RTE & Travel Channel were shown in 25 territories around the world. No Béarla, his documentary series about travelling around Ireland speaking only Irish sparked international debate. He has written numerous travel books in English and Irish, including, include ‘Angels & Rabies: a journey through the Americas’ (Brandon, 2006), ‘Manchán’s Travels: a journey through India’ (Brandon, 2007) and ‘Truck Fever: a journey through Africa’ (Brandon, 2008). His Irish books include Baba-ji agus TnaG (Coiscéim 2006) and Manchán ar Seachrán (Coiscéim 1998). He has written for the Guardian, LA Times and Washington Post.

His play Broken Croí/Heart Briste was nominated for 2 Irish Times Theatre Awards, the Fishamble New Writing Award and the Bewleys Café Theatre Award. It won the Stewart Parker Irish Language Award in 2010. He was commissioned to write a bilingual play for the Abbey Theatre in 2011. He lives in his oak forest in a self-made hovel in the bogs of Ireland.