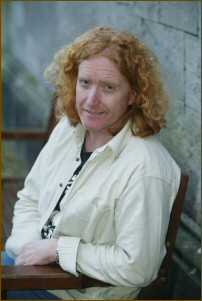 Born in Cork in 1961, Louis de Paor has been involved with the contemporary renaissance of poetry in Irish since 1980 when he was first published in the poetry journal Innti which he subsequently edited for a time.

He has published articles on a broad range of writing in Irish from the court poetry of medieval Ireland to the work of contemporary poets such as Nuala Ní Dhomhnaill and Michael Davitt. His books include a study of narrative technique in the short fiction of Máirtín Ó Cadhain and an anthology of twentieth century poetry in Irish co-edited with Seán Ó Tuama. He is currently working on a study of the writings of Flann O’Brien and is Director of the Centre for Irish Studies at NUI Galway.

A three times winner of the Seán Ó Ríordáin/Oireachtas Award, the premier award for a new collection of poems in Irish, he lived in Australia from 1987 to 1996. His first bilingual collection, Aimsir hreicneach / Freckled Weather was shortlisted for the Victorian Premier’s Award for Literary Translation. He was also granted a Writer’s Fellowship by the Australia Council in 1995. He is the recipient of the Lawrence O’Shaughnessy Award 2000, the first poet in Irish to achieve that distinction. His collection Corcach agus Dánta Eile was published in a bilingual edition in Australia as Cork and Other Poems. The collection, agus rud eile de, was published by Coiscéim in Autumn 2002.