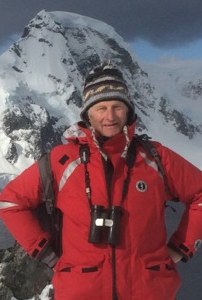 Lives in Mullagh, County Cavan, Ireland. Cousin of the Irish Kildare born Antarctic explorer Sir Ernest Shackleton. He is the family historian for the Irish Shackletons, whose ancestor founded a Quaker school in Ballitore, County Kildare in 1726. He is a graduate of Trinity College, Dublin in Natural Sciences and was awarded his Masters Degree from Ohio State University for work in Arctic Alaska.

As a lecturer and guide, Jonathan has accompanied 37 groups on voyages to the Antarctic in the past 15 years as historian, guide, photographer and Zodiac driver. Highlights of his visits have been landing on the godforsaken Elephant Island at Point Wild, visiting Ernest Shackleton’s grave on South Georgia, travelling to the Ross Sea, landing at Cape Adare, visiting two of the largest Emperor penguin colonies in the world, and a member of the first group to visit the Emperor penguin colony at Snow Hill in the Weddell Sea. Many of these visits have been made whilst working with Quark expeditions. He continues to visit the Antarctica regularily.