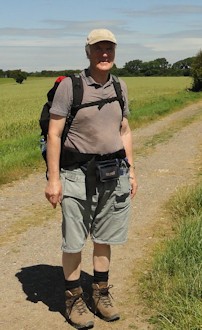 Jim O’Malley, an environmentalist and long-distance walker, is a native of the Youghal area though domiciled in Kerry since 1980. Jim taught English and Irish in Killorglin, 1980-2007. Since his retirement in 2007 he has fulfilled a longstanding ambition in following the Blackwater from source to sea in 2010.

A seven-day journey, hardly an epic walk, but a memorable experience that has been recorded in his recent book – Walking the Munster Blackwater, Ashfield Press, Nov 2015. While emphasising the historic events that occurred along the course of the river, O’Malley presents the reader with a varied snapshot of the Irish countryside. Encounters with farmers, B&B personnel, publicans, anglers and others are blended with his love of nature and a deeply-felt concern for the future of the Blackwater.