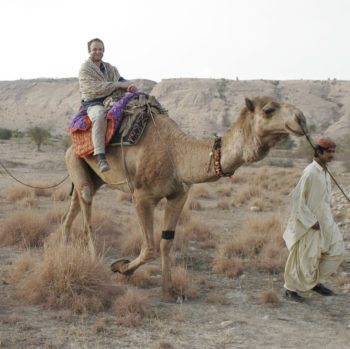 Spellbound by his grandmother’s Anglo-Indian heritage and the exuberant annual visits of her friend the Begum, Isambard became enthralled by Pakistan as an intrepid teenager, eventually working there as a foreign correspondent during the war on terror. Seeking the land behind the headlines Bard sets out to discover the essence of a country convulsed by Islamist violence. What of the old, mystical Pakistan has survived and what has been destroyed? His is a funny hashish and whiskey scented travel book from the frontline, full of open hearted delight and a poignant lust for life.

Isambard Wilkinson was born in 1971. As a young boy in Ireland, he listened to family stories of adventurous botanists and artists, sailors and soldiers who traveled through China and Africa, India and Albania. It fired an urge to roam. Expelled from school at 15, after University he was refused entry into the Royal Marines and instead worked for Country Life magazine before leaving to travel throughout Pakistan, an ambition curtailed by kidney failure. After a stretch on dialysis and his first kidney transplant he became a foreign correspondent for the Daily Telegraph in Spain, and then in Pakistan, where he completed his travels the subject of this book. Following a second transplant he is based in Hong Kong where he works as a journalist.