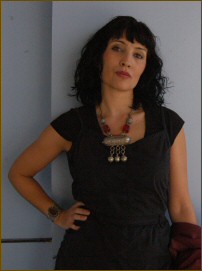 Hadani Ditmars is an international journalist based in Canada and the author of the bestseller, ‘Dancing in the No Fly Zone: a Woman’s Journey Through Iraq’ (Arris Books), a book that provides a unique perspective on the troubled nation both before and after the US invasion. Amid a sea of books written by mainly male, U.S. correspondents with little experience of pre-invasion Iraq, Dancing in the No Fly Zone celebrates the culture and humanity of a place that has been demonized, bombed and tyrannized for decades.

Harpers contributor and author Paul William Roberts called the book: ‘A wholly remarkable and exemplary document, mandatory reading on the subject – written with elegance, wisdom and compassionate humor – a unique triumph.’ Former UN Humanitarian Coordinator for Iraq, Denis Halliday commented: ‘Excellent – this book gives important insight into the Iraq that the author remembers, knows and dreams of emerging from a long nightmare.’

Ditmars, an independent reporter whose mixed European and Middle Eastern ancestry often allowed her to pass as an Iraqi, dared to traverse the distance that separates most Western journalists from their subjects, traveling between two cultural worlds in sometimes dangerous and revealing ways. Unlike her male colleagues, her gender also allowed her a connection with Iraqi women, whose struggle she continues to voice.

Ditmars is an international journalist based in Canada whose work has been published in The New York Times, Time, Newsweek, The San Francisco Chronicle, Salon, The London Independent, The Globe and Mail, Vanity Fair, and Vogue, and broadcast on the BBC and CBC radio and television. Her Ms. Magazine essay on Iraqi women has been adopted for many university courses. She has been covering the Middle East since 1992, Iraq since 1997, and has reported from Iran, North Africa, Tanzania, Uzbekistan, Lebanon, Colombia, Indonesia and Gaza and the West Bank. Her next book is on Israel/Palestine, where she first worked in 1994 for a joint Israeli-Palestinian magazine.