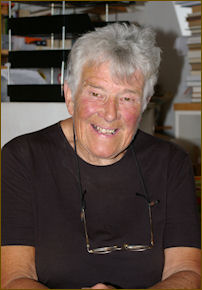 Dervla Murphy’s first book, Full Tilt: From Ireland to India with a Bicycle, was published in 1965. Over twenty other titles have followed, including an account of travels in Northern Ireland during the 1970s, a volume against nuclear power, a consideration of race relations in England during the 1980s and a highly-acclaimed autobiography, Wheels Within Wheels. Dervla has won worldwide praise for her writing and many awards, including the Christopher Ewart-Biggs Memorial Prize.

All of these books were published by John Murray, but following their absorbtion by a conglomerate Dervla sought a publisher as independent-minded as herself and settled on Eland, the travel publisher. Now in her mid-seventies, she continues to travel around the world, happily setting off to trek in remote mountains, and remains passionate about politics, conservation, bicycling and beer.

Dervla Murphy was born in 1931 in Co. Waterford, where she still lives when not travelling. Her daughter, Rachel, and three young granddaughters live in Italy and join Dervla on her travels when possible.