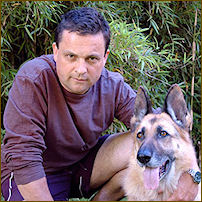 Damien Lewis has spent twenty years reporting from war, disaster and conflict zones around the world, chiefly as a TV journalist but also writing for the quality press. He has written a dozen non-fiction and fictional books, topping bestseller lists, and is published in some thirty languages worldwide. He was recently chosen as one of Britain’s ‘twenty favourite authors’ for the Government’s World Book Day, and his books have won a number of awards. Two of his books have been made into feature films, with a number of others presently under development, and he is scripting one or more of those movies.

Damien Lewis became an author largely by accident, when a British publisher asked him if he’d be willing to turn a TV documentary he was working on into a book. That film was shot in the Sudan war zone, and told the story of how Arab tribes seized black African slaves in horrific slave raids. Lewis had been to the Sudan war zone dozens of times over the past decade, reporting on that conflict for the BBC, Channel 4 and US and European broadcasters.

His slavery documentary told the story of a young girl from the Nuba tribe, seized in a raid and sold into slavery in Khartoum, Sudan’s capital city, and of her epic escape. The publisher asked Lewis if the Nuba girl would be willing to write her life story as a book, with his help as co-author. The book that they co-wrote was called ‘Slave’, and it was published to great acclaim, becoming a number one bestseller and being translated into some 30 lanc guages worldwide. It won several awards and has been made into a feature film Over the preceding fifteen years Lewis had reported from many war, conflict and disaster zones – including Sudan, Sierra Leone, Eritrea, Zimbabwe, Nigeria, Iraq, Syria, Burma, Afghanistan and the Balkans. He (and his film crew) traveled into such areas with aid workers, the British or allied military, UN forces or local military groups, or very much under their own steam. He reported on the horror and human impact of war, as well as the drama of conflict itself. Often, he worked alone. Often, he filmed his own material over extended periods of time living in the war or conflict zone.

It was only natural that having seen so much of global conflict he would be drawn to stories of war, terrorism, espionage and the often dark causes behind such conflicts when he started writing books. Having written a number of true stories, in 2006 he was chosen as one of the ‘nation’s 20 favourite authors’ and wrote his first fiction, Desert Claw, for the British Government’s Quick Read initiative. Desert Claw tells of a group of ex-Special Forces soldiers sent into Iraq to retrieve a looted Van Gogh painting, with a savage twist to the tale. That fiction was followed up by Cobra Gold, an equally compelling tale of global drama and intrigue and shadowy betrayal.