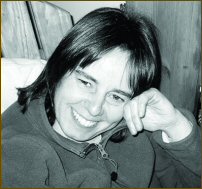 Corina Duyn was born in Holland where she trained as a nurse and social care worker before moving to Ireland in 1990. While running a restaurant at Dromana House in Villierstown, Co. Waterford, she was inspired by the natural surroundings. As a result she incorporated nature into her doll making, which later developed into a business. These ‘Fantasy Folk’ figures are in private and corporate collections throughout Ireland, Europe and the USA.

Corina later moved to a cottage near Lismore with her then husband. She continued to develop her art and began teaching doll making. When the relationship ended Corina entered a new phase in which she began to focus on combining her art and teaching experiences with her previous work as a social care worker.

In June 1998 while applying for the Art Therapy Course in the Cork Crawford College of Art, she was brought to hospital with suspected meningitis. To date, Corina has not fully recovered from whatever virus she had contracted. A diagnosis of M.E. was confirmed in September of that same year.

Hatched
‘Hatched’, a distillation of 8 years of writing, is an account of her creative journey through M.E., a process that helped her to come to terms with the debilitating illness M.E. Her poetry and images allow us to glimpse her sense of humour along with the strength of mind, that has seen her through many difficult and painful times. As she says herself, it is not a journey she would have chosen, but it is one that has brought her to many interesting places.

The DVD/Documentary ‘Flight Path’ by Katie Lincoln, is a short documentary charting Corina’s journey as she undertakes the writing of her book ‘Hatched’.

This project has been supported by the Waterford County Council Arts Office.