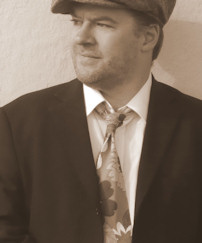 Charlie Connelly is a bestselling author and award-winning broadcaster. He is the author of ten books including Attention All Shipping: A Journey Round The Shipping Forecast, In Search Of Elvis: A Journey To Find The Man Beneath The Jumpsuit and Our Man In Hibernia: Ireland, The Irish and Me.

Three of Charlie’s books have been selected as BBC Radio 4 Book of the Week while Attention All Shipping was voted the second greatest audiobook of all time in a Guardian/Waterstones public poll. Audio versions of his books have been narrated by Martin Freeman, Stephen Mangan and Julian Rhind-Tutt.

Charlie was an award-winning presenter of the BBC television Holiday programme and co-presented the first three series of the popular BBC Radio 4 series Traveller’s Tree with Fi Glover. He was also a regular contributor to the same station’s Excess Baggage.

A popular public speaker Charlie has lectured at the Royal Geographical Society in London and sold out events at the Edinburgh Festival and Glasgow Concert Hall. After four years in Ireland Charlie recently returned to his home city of London after missing Charlton Athletic terribly.