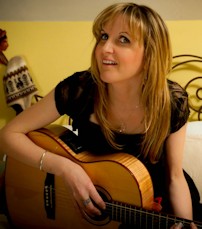 Avi McGourty – originally from Templemore, Co. Tipperary first discovered her love for singing and entertaining her audiences in Johnny Walsh’s Pub, Lyon, France where she was working as an English Language Assistant. It was from there that her passion grew and took her to more Music Venues and Celtic Festivals in France and further afield, her fondest memory being that of travelling to Norway, Trondheim and Steinkjer. It was journeys like these and more that inspired her to write songs along the way – her songs telling stories of where her paths have taken her.

One of Avi’s most popular songs “Less Than a Second”, written after her 6 weeks of backpacking around Australia, won her 5000 euros with Midlands 103 Radio Station back in August 2003, enabling her to complete her Debut Album “No Alibis, No Lies”. She completed her Debut Album “No Alibis, No Lies “. Winning the Midlands/ Smirnoff Ice Search was an added bonus where she was also awarded recording time with Roseland Recording Studios and primetime advertising on Midlands Radio. Her appearance on the Irish Television Station Tg4 and on Today Fm National Radio Station with Phil Cawley encouraged her to seek more Singer/ Songwriter events as opposed to covering other artists’ songs. Avi has supported some of Ireland’s popular artists like Luka Bloom, Don Mescall, Damien Dempsey, Dickie Rock and even the late Joe Dolan.

This Summer she will be supporting John Spillane for the Clancy Brother’s Festival and Charlie McGettigan at the Clonmel Busking Festival. Avi has spent the months of February and March this year in Lyon, France recording some of her new songs and gigging there too. She was asked by the Jazz band Abigoba to sing for their cover version of “Stairway to Heaven” and to play in concert with them in February and June of this year.

Avi explains – “There has been a gap in the years where I went back teaching French fulltime in Ireland! The longing to entertain and sing my songs was always there and it was extremely difficult to put my whole heart into my music, write, record and sing with a fulltime job. I finally learned I couldn’t do both. The love for singing and writing is too great and so I am working on the music fulltime. It has never felt so good and I know this decision to immerse totally into music is something I will never regret, regardless of how far it will take me.”

Avi’s lyrics come from the soul, her voice exudes both a sense of joy and deep emotion and you can witness this when you come to see her perfom as she talks of her songs and sings with a heartfelt honesty.