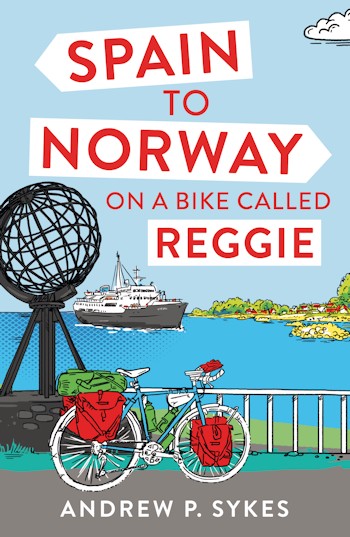 Andrew P. Sykes is a writer, cyclist, speaker and teacher. He’s also a lover of those quirky, humorous travelogues that meander comically from one minor adventure to the next. So writing about a long-distance cycling trip across Europe from southern England to southern Italy seemed the natural thing for him to do once his small-time odyssey was over. The result was ‘Crossing Europe on a Bike Called Reggie’.

In 2013, he embarked upon a second trip from Greece to Portugal following the Mediterranean coast; ‘Along The Med on a Bike Called Reggie’ was published in 2014.

A third trip was completed in 2015 from the southern tip of Spain to the northernmost point of Norway. The book, ‘Spain to Norway on a Bike Called Reggie’, will be published by Summersdale in spring 2017.

Andrew has now returned to his northern roots and lives in the beautiful Calder Valley of West Yorkshire, the area where he was born and brought up. He currently mixes teaching with writing and, of course, dreaming of the next long journey.