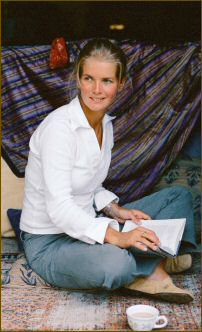 Alexandra Tolstoy received an MA (Hons) in Russian from the University of Edinburgh. After graduating she was accepted on the graduate training scheme at Credit Suisse First Boston, as an Eastern European equities broker. However, this life was not for her and she resigned after a year and spent the next couple of years working and travelling abroad. During this time she and a friend spent six weeks walking the old Camino de Santiago pilgrimage route through Spain.

Alexandra is a Fellow of the Royal Geographical Society and in 1999 she was a member of the team that completed the Silk Road Expedition. An eight-month journey, travelling solely by horse and camel, this expedition retraced 5,000 miles of one of the former trading routes that make up the ancient Silk Road. The expedition received extensive coverage in the British press and Alexandra wrote a book on the journey, The Last Secrets of the Silk Road, commissioned by the English publisher Profile. It was published in March 2003 and came out in paperback in March 2004. It has also been published in America, Italy and Holland.

After the Silk Road Expedition Alexandra moved to Moscow, where she wrote her book and continued to travel in Central Asia. In 2002 Alexandra and a friend rode 3,000 miles on horseback through Mongolia and Siberia. On this and the Silk Road Expedition Alexandra was accompanied by Shamil Galimzyanov, a Russian show-jumper from Uzbekistan, and in September 2003 they were married in the Russian Orthodox Cathedral in London. Together they now organise riding holidays in Central Asia, selling them through the British travel agent Wild and Exotic.

Shamil and Alexandra began a third expedition in April 2004, riding Akhal Teke horses from Turkmenistan to Moscow. The aim was to retrace an expedition undertaken by 28 Turkmen riders in 1935, who rode the 2,700-mile journey in an incredible 84 days. Due to foot and mouth disease in Russia they were unable to complete the expedition that year, but they resumed it from the Kazakh/Russian border in late 2006, riding into Moscow’s Red Square on November 16th. Alexandra has received a second contract from Profile to write an account of the journey, to be titled The Horses of Heaven.

Alexandra and Shamil currently live in Moscow, where Alexandra is writing her book, as well as working as an interior designer. She also works for BDI, a brand development company that assists European companies wishing to develop their business in the former Soviet Union. Her latest client is Yo! Sushi, the successful British restaurant chain, for whom Alexandra has secured a Russian franchise partner.