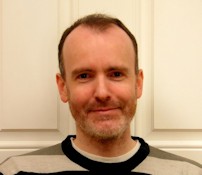 Alan Murphy is the Dublin-born writer and illustrator of two previous collections of poetry for young readers, the most recent of which, Psychosilly, was on an Irish Times book list. Having previously plied his trade as a painter in Dublin, he currently lives in Lismore, where he writes, continues to make art, photographs cows, and occasionally reviews books. He recently received a bursary to further his literary and artistic endeavours at the Tyrone Guthrie centre from Waterford county council. Previous festival appearances include Electric Picnic, Poetry Now, the West Cork Literary Festival, and, of course, Immrama. His forthcoming collection, Prometheus Unplugged, is a breathless extravaganza which manages to combine rock music and Greek mythology.

Book Launch: Prometheus Unplugged Alan’s latest book is a collection of poems and songs based around the theme of music and the rock concert. The ancient Greeks have heretofore been revered for their art, philosophy and literature, but not for their rock music… until now that is. A humorous romp through the rock and roll circus illustrated by the authors colourful and eccentric collages.