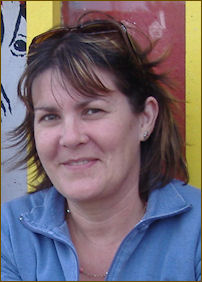 Áine Uí Fhoghlú comes from An Rinn, Co. Waterford. Has published two collections of poetry Aistear Aonair (1999) and An Liú sa Chuan (2007) both by Coiscéim publishing as well as editing Dánta Mílaoise (2000), a collection of poems by secondary school students in County Waterford. Her poems have been featured in various publications and anthologies, often in translation. Áine is on the Writers in Schools panel and has done many workshops at primary and secondary school level as well as with adult groups. Was Writer in residence with County Kilkenny VEC in 2006.

Has won many awards for her poetry including the Irish language prize at Dún Laoghaire/Rathdown International Poetry Competition 1997, Strokestown International Poetry Festival 2001, was shortlisted for Brendan Kennelly Summerfest 2006, was awarded the Michael Hartnett Poetry Prize for 2008. Was awarded a bursary from Ealaín na Gaeltachta in 2006 and has just been awarded an Arts Council Bursary to pursue her writing in 2009.